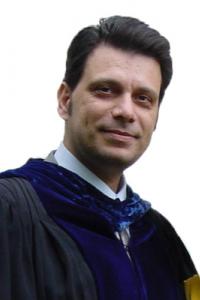 Born in Greece, Christofilis Maggidis received a thorough classical education in the Classical Lyceum of the Anavryta School, and the University of Athens (B.A. in History and Archaeology, 1988), being awarded several honorary distinctions and scholarships for excellence. He further pursued graduate studies on prestigious fellowships (Fulbright, William Penn, and Charles Williams Fellowships) at the University of Pennsylvania (Ph.D. in Classical Archaeology, 1994), and postdoctoral studies as a Fellow at Brown University (1997-1999) and a White-Levy Research Fellow at Harvard University (1999-2001). Christofilis has taught archaeology, ancient history, classics, and philosophy at Campus College and the University of Indianapolis, Athens. In  2001, Christofilis joined Dickinson College as the Christopher Roberts Professor of Archaeology in the Department of Archaeology, where he has been teaching courses in the art, architecture, and archaeology of the prehistoric Aegean, classical Greece, Rome, Egypt, the Near East (Mesopotamia and Anatolia), in ancient Greek religion and athletics, Athenian democracy, ancient burial customs, and ancient technology. Christofilis Maggidis is an active field archaeologist with long field experience since 1985 as a trench master and sector supervisor at several archaeological sites (Thera, Idaean Cave and Archanes in Crete, Glas, and Mycenae); he is currently Assistant to the Director of the Excavations at Mycenae, and Director of Glas. He was elected member of the Athens Archaeological Society in 1999 and President of the Mycenaean Foundation in 2013. His main research interests focus on Aegean Prehistory, but also include Classical Sculpture and Architecture, Archaeological Methodology and Interpretation. Christofilis has given 38 invited lectures and presented another 41 international conference papers worldwide. His publications comprise 25 articles, excavation reports, and four forthcoming books: The Lower Town of Mycenae I: Geophysical Survey 2003-2013 (publication-ready); The Lower Town of Mycenae II: Excavations 2007-2011 (in working progress); The Palatial Workshops of Mycenae: The Artisans ' Workshops and the House of Columns (in progress, near completion); Mycenae Excavations: Building K (in working progress).